Engaging Concerts for Students of All Ages 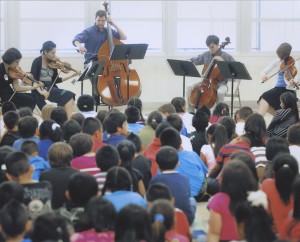 The Toomai Quintet specializes in performing interactive concerts for K-12 school audiences; over the last nine years, Toomai has reached thousands of enthusiastic students across the United States. With numerous unique scripted programs (available on request) Toomai is able to connect with students of all musical backgrounds.

Each individual program is tailored to a specific age group, with the opportunity for modification to accommodate different levels of musical experience. We’ve played for everyone, from young children who are novice listeners to advanced music students enrolled in performing arts focus programs. Our educational programming runs the gamut of the Quintet’s repertoire, including everything from standard classical masterpieces, arrangements of music from around the world, and important new works for bass quintet. 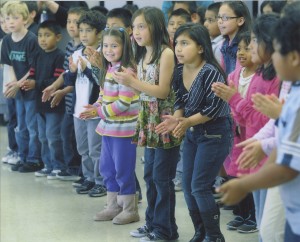 Whether it’s a second grader gasping at just how BIG a bass really is, or a 10th grade violist who wants to know what rehearsal techniques make successful chamber music, we value every connection we make with students during our in-school performances.  We ourselves often come away from these projects hearing the music a little differently, and are always looking forward to the next opportunity to share this music with the next group of students!

Below are a few examples of Toomai’s past projects in schools:

Residency at the Bak Middle School of the Arts

A collaboration between The Juilliard School and the Bak Middle School of the Arts, this mini residency put us in contact with some of the greatest young music students we have encountered yet! We are thrilled to be returning in December 2012 with two new programs: “American Explorers, Pioneers, and Inventors”, which investigates influences and innovations in 20th century American art music; and “Playing the Lead”, showcasing ways in which Classical composers prominently featured each member of the string family. A chamber music workshop, upper and lower strings masterclasses, group technique classes, a Q&A about the Juilliard experience (the alma mater of four out of five of us) and two interactive performances make for a very busy but exciting two days at Bak. We couldn’t be more pleased to revisit the wonderful environment of earnest musicianship and enthusiasm cultivated by Bak’s students, teachers, and staff. 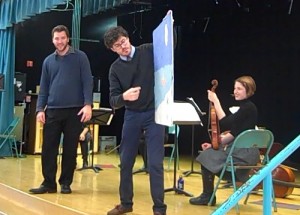 A giant postcard helps students imagine a tropical nighttime scene of their own during Ponce’s “Plenilunio” (New Canaan, CT)

In partnership with Carnegie Hall’s Weill Music Institute, the Toomai String Quintet held a residency at the strings program at New York Public School 161.  Over a total of five school visits in the Spring of 2010, Toomai conducted a composition workshop and performance project focused on Cuban music. Students learned about Cuban song forms and Afro-Cuban rhythms, eventually improvising and composing their own melodies.  The residency culminated in a final performance where the students performed their newly created music alongside Toomai. 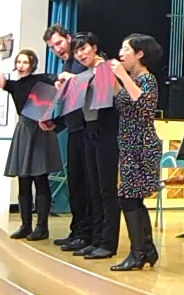 Singing a graphic score piece created by students in preparation for a movement of James Tenney’s “Quintext” (New Canaan, CT)

In 2007, Toomai String Quintet won the 92nd Street Y’s Music Unlocked! Competition for emerging ensembles dedicated to education and community engagement.  Toomai worked intensively with members of Music Unlocked! to create the interactive program “Traveling with Toomai”. This program is designed for a K-2nd grade audience and explores the different ways a listener can experience a “journey” through music.  Toomai gave four performances for groups of 400 children at Kaufmann Concert Hall at the 92nd Street Y, and continues to perform the program in elementary schools in New York and beyond.