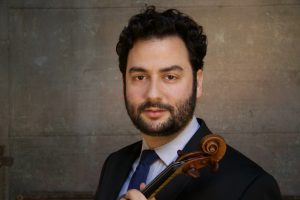 A native of San Diego, violinist Alex Fortes is recognized for his versatility and warmth. Recent orchestral and chamber music performances have included performances in France, Germany, Denmark, Austria, and Indonesia, as well as throughout North America with groups such as the Henschel Quartett, Dalí Quartet, Franklin String Quartet, Momenta Quartet, the Orchestra of St. Luke’s, the Knights, Quod Libet, and A Far Cry.  His playing is featured on A Far Cry’s 2014 Grammy-nominated album, Dreams and Prayers, as well as on Law of Mosaics, which The New Yorker’s Alex Ross hailed as one of the top ten albums of 2014. He can also be heard on a forthcoming album with the Henschel Quartett and pianist Donald Berman featuring the music of Chris Theofanidis.

Fortes holds a strong interest in finding new contexts in which to experience familiar music. His recent arrangements of Schubert lieder and chamber music were hailed by the Boston Globe as “uniformly resourceful and complementary…smart, subtle.” In May 2016, A Far Cry premiered his arrangement with Sarah Darling of Bach’s Goldberg Variations in collaboration with pianist Simone Dinnerstein.

Alex has participated in educational residencies in both English and Spanish related to entrepreneurship, music performance and education,  at colleges and public schools throughout the United States. He holds degrees from Harvard College and Mannes College, and his teachers include Mark Steinberg, Peter Zazofsky, Hernan Constantino, Mary Gerard, and Michael Gaisler.