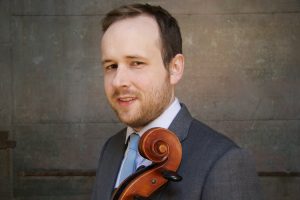 Cellist Hamilton Berry’s eclectic taste has led him to pursue a variety of performing, arranging, and composing projects in the New York area and beyond. He has performed with A Far Cry, Novus NY, The Con Brio Ensemble, Founders, Ensemble ACJW, Decoda, and the Gotham Chamber Opera; collaborated with pop artists including Debbie Harry, Bjork, Becca Stevens, Vampire Weekend, FUN., and Cults; and written and arranged music for Speed Bump, a string trio co-founded with violist Nathan Schram and cellist Eric Allen. He recently joined the teaching roster of Musicambia, a nonprofit that offers music lessons to inmates at Sing Sing Correctional Facility. A Nashville native, Hamilton has played at the Chelsea, Mecklenburg-Vorpommern, Olympic, and Yellow Barn music festivals. In 2009, he received his Master of Music from The Juilliard School, where he was a student of Timothy Eddy. His previous teachers include Felix Wang, Grace Bahng, and Anne Williams. In June 2010, he and several Juilliard colleagues taught master classes and played concerts for children in the favelas of São Paulo, Brazil, in partnership with the Guri Santa Marcelina program. During his fellowship with Ensemble ACJW – a program of Carnegie Hall, Juilliard, and the Weill Music Institute in partnership with the New York City Department of Education – Hamilton was a visiting teaching artist at IS61 on Staten Island.