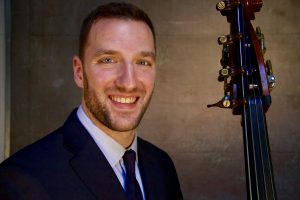 A native of Valencia, California, bassist Andrew Roitstein has been featured in chamber music concerts in New York’s Zankel Hall and Washington DC’s Kennedy Center, and has performed with the New York Philharmonic and Hong Kong Philharmonic.  He is a founding member of the award-winning Toomai String Quintet, an ensemble that has appeared in chamber music series at Carnegie Hall and the 92nd St. Y, among others.  Mr. Roitstein has recorded for artists such as Joanna Newsom (Drag City) and Jessica Pavone (Tzadik Records).  In 2007, he won second prize in Juilliard’s Double Bass Concerto Competition and was a semifinalist in the 2011 International Society of Bassists Solo Competition.  He has participated in the Lucerne, International Ensemble Moderne Academy, Aspen, and Sarasota music festivals. Mr. Roitstein enjoys playing Latin American music and performs with Argentinian Tango greats Hector Del Curto and Pablo Ziegler. In addition to performing, Roitstein is dedicated to education and serves as Senior Music Curriculum Specialist for Juilliard Global Ventures and faculty of the New York Philharmonic’s “Philharmonic Schools” program. As an arranger, his works have been performed by members of the Chamber Music Society of Lincoln Center, members of the New York Philharmonic, and Joshua Bell.  Mr. Roitstein received his Master’s and Bachelor’s degrees at the Juilliard School, where he was a student of Eugene Levinson.