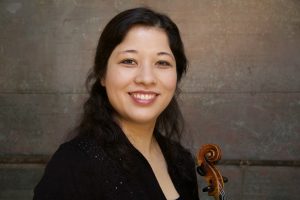 Violinist Emilie-Anne Gendron, lauded as a “brilliant soloist” by the New York Times, is rapidly garnering acclaim for her perceptive and elegant interpretations as a soloist, recitalist, and chamber musician. She gave this season’s opening recital at the Louvre in Paris, where she was praised by critics for her “excellent technical mastery” and “undeniable sensitivity” (ClassiqueInfo); other recent highlights include an appearance in Avery Fisher Hall with the Juilliard Orchestra, a concert devoted to chamber work world premieres on MoMA’s acclaimed Summergarden series, and a recording of the Mendelssohn Octet for Canary Classics with violinist Gil Shaham. Based in New York, Ms. Gendron is a core member of the acclaimed conductor-less Sejong Soloists and is also a member of the Momenta Quartet, recent recipients of the prestigious Koussevitzky Music Foundation commission grant. A passionate advocate for new music, she has worked with such eminent living composers as Gordon Beeferman, Roger Reynolds, Matthew Greenbaum, Behzad Ranjbaran, Hiroya Miura, Aaron Jay Kernis, Samuel Adler, Elliott Sharp, and Philip Lasser. She has also enjoyed success in several major competitions: she is a past winner of the Stulberg String Competition, and most recently took 2nd Prize and the Audience Prize at the 2009 Sion-Valais (formerly Tibor Varga) International Violin Competition. Ms. Gendron was trained at the Juilliard School where her principal teachers were Won-Bin Yim, Dorothy DeLay, David Chan, and Hyo Kang. She holds the distinction of being the first person in Juilliard’s history to be accepted simultaneously to its two most selective courses of study, both the Doctor of Musical Arts and the Artist Diploma. She holds a B.A. in Classics from Columbia University as a graduate of the Columbia-Juilliard joint-degree program, and a Master of Music degree and an Artist Diploma from Juilliard.